When I first anticipated a relationship with J I was berated by my best friend because I banded about the term soulmate. She, quite rightly, was cross as for 15 years prior to this event I had always poopooed the idea of soulmates as romantic guff. She had insisted that it was her soulmate that she was looking for, and I, irritated by her insistence, would try to reason with her, explain how the world was not like that – and even if it was what were the chances of meeting this supposed soulmate? Her response was unwavering. She looked at me sympathetically and announced that Fate would play a hand – and didn’t I believe in destiny?!

In those days I did have a view that soulmates, if they existed at all, spent their entire lives looking dewy-eyed at each other and cooing gently; a condescending viewpoint at best, I concede.  At the time I was married  to a lovely bloke; we got on well, we lived if not always harmoniously then with a great deal more accord than some of our friends – we were friends, and at that time I thought this was as good as “soulmates” got.

Then unexpected things started to happen. I became “Hallmark woman” thinking and saying romantic things. I developed a jukebox in my head, and I found meaning in all sorts of love songs that I had previously not taken seriously. I started singing – out loud!  It was weird I tell you, but it was not the most weird thing of all, that happened 2 years earlier.

I began a masters degree, and as part of the practical work I was to be allocated a supervisor. In the room with me on the day of the allocation were my 25 fellow students and seven strangers – our soon-to-be-assigned supervisors. I immediately noticed the tall, silver-haired, bearded man and I distinctly remember saying to myself – he will be my supervisor and he will be called J .And so it was, and so he is, and I was not surprised. And this completely unremarkable and forgettable event was lodged in my memory for ever as clearly as if it had just happened yesterday. 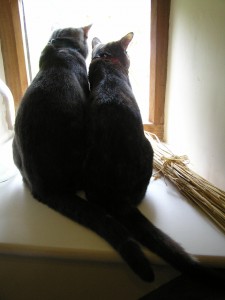 After the year we spent in a professional relationship we became friends by mutual consent. I did not know at this time that J does not make a habit of “acquiring” friends from professional contacts, and so I did not know that this was a rare event. At this point all was unconscious, maybe now I could perceive it as we were being driven by destiny, and Fate was taking a hand? We talked of things as we did with no other, and we shared our secrets in a growing intimacy that neither of us was able to prevent; it slipped in while we drank tea and by the time we became aware it was too late, we had gone over Niagara Falls and were waiting to splash down – to sink or swim, to drown or endure.

A rendering that may be seen as inevitable began, as both J and I sawed up our past lives to be together. We ripped up marriages and families like ripping up carpets, leaving exposed and cold surfaces. We alienated people and had major transition issues, going in to shock which lasted months if not years. We were a million, million miles away from looking at each other with dewy eyes and we were not cooing gently.

As I look back on this from a few years down the line I see that my original issues with the idea of soulmates were correct; there is nothing lovely-dovey or superficial about meeting someone who unpicks the fabric of your being, which is as painful as it sounds, but wants to help you to weave a different one in the more colourful pattern of the new life you lead. Someone whose deep soul needs are so whispered that you can hardly hear that they are the same as your own. Someone who has spent a lifetime hushing and stilling these needs so as not to have to feel them unfulfilled, but whose eyes reflect the fountains of sorrow you share, and reveals those you can help to heal.

No, I still don’t believe in soulmates in the way that I perceived them back then – but who’s to say my dear friend wasn’t imagining what I have since discovered; soulmates are not found in Hallmark card sentiments, nor in trite lyrics to love songs, but they are found in other people and that precious, intimate connection between souls.