This will be the first time in, probably, 40 years I have not sent a Mothers’ Day card to my mother. Actually she had a very traditional view of this, and it was always my job to find a card that said Mothering Sunday, and not Mother’s Day, the former being the original festival. Having just Googled this I find that the term Mothering Sunday originated in the 16th century, it was a date in Lent when people went back to their mother church, and were said to have gone a-mothering. This was overtaken by an American institution of celebrating motherhood which was begun by Anna Jarvis from West Virginia in 1905 who celebrated her mother in memorial the year she died. It eventually became a national holiday in the US when Woodrow Wilson signed a declaration in 1914. As with other parts of the world in the present day, this holiday is celebrated on the second Sunday in May in the US. The UK is peculiar in that it conflagrated the two things, and left Mothering Sunday in Lent (therefore the date moves about) and overlaid it with Mothers’ Day, so, unlike many other counties, this is not celebrated in May. 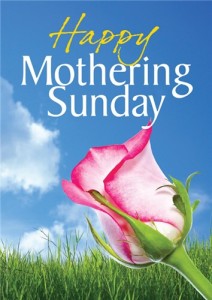 I have missed the search for the card. It was always possible to find a Mothering  Sunday card, although it did get a little harder in more current times, but it had also to be one that wasn’t too soppy or trite; as the holiday got more commercialised this became more troublesome. I found myself automatically looking at the cards in the supermarket about three weeks ago, and then suddenly realised that I didn’t need to buy one this year as I didn’t have an address that I could send it too.  It is the first Mothering Sunday since mum died and it is difficult, unexpectedly so. Given this, and the fact that I can’t  send something, instead, I will say it here, happy Mothering Sunday, mum, wherever you are.