I was away in Australia for a month and got back 2 weeks ago. It feels like a long time since I was writing here about packing now that I have subsequently unpacked and put away all that was eventually decided upon. (Note to self: I must remember it was too much as I wore only about half of what I took.)  The intervening couple of weeks since the return has felt disorienting while I deal with the readjustments that ensue from travelling half way round the world.

Most obviously is the time zone change. We literally are awake all night and sleep all day, if you go by British time. This is not helpful, and I find that immediately I am on the plane I need to start to adjust to the new time, so on the way out I do this by sleeping when it is night in Australia. This is easier in international airspace, where it is “no-time”, than once we have arrived and are faced with daylight that feels “wrong” for the body clock. On the way back we had a stop off in Singapore for a few hours, where we slept in the transit hotel, which was a marvellous idea; a bed and a shower! Then once on the plane from Singapore to Heathrow I should have been sleeping as it was nighttime in England, but I couldn’t sleep so watched 6 films in a row and arrived at breakfast time, 13 hours later, with square eyes. The jet lag thing was quite insidious for me this time. I felt fine then I suddenly felt tired… at about 7pm. Then I awoke at 3am, ready to start the day. This pattern went on for ten days, the longest I have ever had it! This is not so great in December when it is already dark by 7pm and not light until 8am; the daylight was not on my side here.

The day length links to the second thing I notice; the season change. In the antipodes it is spring at the moment, and the days are lengthening while the weather is warming up. Now, we did not have it purely hot and sunny while we were in Oz, it was a very mixed 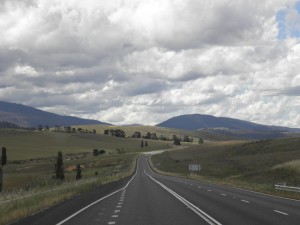 bag, and in the mountains in was positively cold in fact it snowed the week we were there!  The day we arrived in Sydney we were nearly blown over by the strength of the wind, and the photos of us wearing fleeces and under grey skies looked more like the land we had left – except for the Opera House in the background, there was no mistaking that. We experienced rain and storms, snow and wind and then…. the sun came out, and it was hot! Coming back has been a bit of a shock, admittedly it is not freezing, but it is winter and as such colder and darker, which feels a lot less hospitable when the day before we left Sydney we had 14 hours of sunshine and the mercury reached 32 degrees.

Another thing about coming back to the UK is how small it is, how compact the towns and the roads feel. In Australia the land is big and seems to go on for ever – there is a sense of grand scale to the landscape that seeped in while I was travelling through it. The roads are wide, and the towns are not cramped, I guess they have space! Here I notice the short distance between everywhere, and particularly here in the south, how there are not many open spaces – houses, and people, everywhere. There is more room to breathe and more accessible solitude in the bush and the mountains that we visited. I miss that in our own countryside. 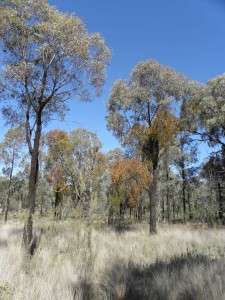 The least explicit readjustment I need to make is back to living within the British culture. The contrast to Australia where the people are more extravert and have a candid approach to conversation, which is disarming at first, appears vast. Where the language is superficially the same as English, but you soon learn that the way it is used is not, so you can be fooled into thinking you grasp what is meant (you probably don’t). Where they have a pioneering and exploring spirit, and because they conduct much of their lives outside, this comes through in the way they socialise, spend leisure time and think about what is possible. Never has the metaphor of the young buck and the old imperialist nation been so uppermost in my mind. I am unsure about Britan, and indeed Europe, what is the prospect here? While Australia is going forward, towards Asia and the future. This puts me in mind of what the kangaroo keeper explained to us at the zoo; kangaroos can only move forward they cannot reverse as their muscular tail prevents it, so just like their anthem, they must Advance Australia Fair. It feels very much like they are of one voice in that belief.

I find myself with one day to go before we set off on the big trip down under. Now, I have decided in the main what I want to take in the clothing department, and which suitcase I will take. But this really is only about half the job. In my past I used to make a list of everything that I was planning to take on a trip with me, often a few weeks in advance. All outer layer clothing items were listed under categorical headings: trousers; shirts;  jumpers; shoes; coats. I used to count how many pieces of underwear were required and carefully record that too. I would also list the books I wanted to take and other items such as binoculars, camera, journals. Then packing would proceed in an orderly manner according to the list.

Today I do not have a list of the items that will end up in Australia on Sunday. I am not even sure I completely know what those items will be, I don’t  have them all in one place and I certainly don’t have them anywhere near a suitcase. To my former self this feels highly unorganised and scary, a “flying by the seat of the pants” moment to pick out a pertinent metaphor.

The previous lists I made served the purpose of tightly managing the environment around me. I wanted to be in control; keeping control of the environment gave me the illusion of being in charge of what happened around me, and this increased a feeling of safety and security within me.

I realise now that very many of my former habits have slipped away as I have become more aware of how life is free-flowing, and I don’t have control. I used to be organised and ultra tidy – I could hardly tolerate any type of disruption or unforeseen event – now I still prefer not to have unanticipated things happen, but I am less likely to freak out. I can accept a level of disorder or muddle, and if I spot that I am starting to notice or fret about it then I know it is a fair indication that my stress levels have risen.

So, the packing will happen tomorrow morning, I am not unduly concerned about the content. I am much more of the opinion now that as long as I have my tickets, passport and some money – then for everything else there is Mastercard…

According to the dictionary future-proofing is defined as “to make ready to meet potential future requirements, or make use of potential future opportunities.”  This is what I am doing in my life right now as J and I seek to make plans for our future after he retires in August 2014.  It feels a little like herding cats. There are multiple and varied possibilities; travelling, boating, house purchasing, not house purchasing, renting, world tours…. you get the idea. Don’t get me wrong, it is a wonderful puzzle to have to solve, but I never knew the future could be dizzyingly rich and varied.

Up until now, it seems, I did not lift my head out of the “work-and-house-owning” more conventional route. I left school and went straight to University, I left there and went straight to work – at no time did it cross my mind to choose to travel or break out of the rut. At 18 or 21 I was not adventurous enough to try this, although folk around me did go off inter-railing, but I did not feel I was missing out (this was the 80s – maybe a bit before gap years became de rigour). My parents did not encourage breaking free, or being different, and I complied with expectation; I married and owned houses, and worked and paid a mortgage… My life was on a straight train track, a single unwavering line towards a retirement that seemed, and indeed was, many years away.

Then I met and fell in love with J. This blew up the straight track I was on and, if I might stretch the metaphor, I think I moved off a train track and on to a sea… a vast swelling ocean that disappeared over the horizon with no markers or landmarks, no obvious direction of travel, and no suggestion that this situation would alter anytime soon. Now life could be anything, or everything, and I would have to take responsibility for my choices consciously and honestly; no more could I rely on conventionality to forge my path, or feel I could devolve the responsibility for living my life to fate or family ties.

So, I face my new future squarely, one with many precious opportunities. The official date it begins is now determined, and it is only 10 months away! Can I future-proof this future? There are many bridges to cross to get there, although it appears we may first have to build these bridges. Most importantly we have to choose where they go, which rivers we cross, how we want to live this life.

Also, we have to do some proper planning. The back to basics, nut and bolt budgeting and project management:  What can we afford? What do we want do with our stuff?  Where do we want to end up? Again, many questions and not so many answers yet.

I am lucky to have so many choices, and I now feel more adventurous and freer than in any time previously in my life; so much more ready to meet any future requirements. Given this, I intend to make use of any and every upcoming opportunity that takes my fancy in this possibility laden future.