… away from my computer and from home, so thought I would share here one of the adventures. 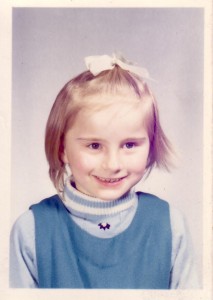 Me at five years

Last week I enjoyed a couple of days with my adopted mum reminiscing over my childhood. Well, I was only able to cover 3 years in the time we were together, but I left with a promise that I would return for more.

Mum used to keep a housekeeping and events diary during the time I was growing up. It was used mainly as a way of completing the weekly letter to my Gran who lived in Dorset, whom we saw twice a year in the half term weeks. Apart from that I think it recorded household expenditure (in the days long before home computers) and some reminders for birthdays. It was the family “go to” book for what happened when. This was true for my inquiry, and the main thrust of our discussion on this occasion centred around 1972 – 1974 when I was between the ages of four and seven. In this time we moved house twice, dad seemed to always be painting and repainting rooms, and mum was constantly washing bedding of various sorts, as well as massive amounts of clothes and curtains. These were the events that were worthy of inclusion, along with the car breakdowns, plus the job and school starts and stops. Included too are what appears to be a constant set of illnesses of one sort or another; we were faithful congregation at both doctors and church.

I am engaged in life writing, and am working on the autobiographical material in my life. I had spied the diaries in the bookshelf last Christmas when I was up with the parents, and it reminded me that they would be a good way to access some facts through the years of my childhood; what really happened when and where. At the time I arranged the visit this was all I was thinking would be possible, but as mum and I were talking, the factual record became dotted with living memories. We recalled my brother’s 8th birthday, long forgotten until we remembered him being car-sick and not making it out of the car in time during his special day out. The car had plastic seats, and although mum and dad tried to clear it up as best they could, the car stank for weeks afterwards.  Mum reckoned that it stank until they sold it – lovely!

We talked too of mum’s history and childhood; my grandparents and her cousins. She has a great pile of stories ready to come out, some of them she has already written for various magazines, competitions and writing groups over the years. I love reading her reminiscences; by doing so and in hearing the stories (some old favourites of hers I have heard many times before!) I am able to add adult understanding to my own history, and that of my adopted family. This feels like an important process of growing up and accepting what has gone before as well as appreciating the long and winding road that brings me to where I am today. Besides, it is all work in progress, and grist for my writing mill…