James Peter Arnold was born in May 1933 in Swanage on the Isle of Purbeck, Dorset. His parents ran a small holding in the neighbouring village of Corfe Castle where his dad was also a driving instructor.

Dad spent his first eleven years in Corfe, sharing life with his parents, his sister, Jill, born a few years later and his cousins who also lived in Dorset. He went to the village primary school to begin with but his parents had aspirations for him so at eight he went to Hillcrest Preparatory school in Swanage.

I think he enjoyed those days in Dorset, he told me of walking over the fields to Dancing Ledge and swimming in the sea, as well as being out on the hills over Corfe Common.

Growing up around animals on the smallholding his love of all things furry and four legged was born and we can think now of his menagerie of cats and dogs that accompanied him through his life. 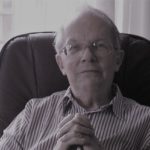 At eleven he was sent to Gresham’s, a boarding school near Holt in Norfolk and he remained there completing A levels. His parents dreamt of a doctor in the family but unfortunately, dad was not too great at science!

He spent the next five years working in and around London at London Transport and at Vickers, both in admin posts. He was heard proudly boasting in later years of having signed the Official Secrets Act at Vickers, but of course, he couldn’t say why!

In 1956, at 23, he applied to the School of Librarianship at Loughborough College, where he spent a couple of years becoming a Chartered Librarian, the career he would follow for the rest of his working life.

He loved the classification work and the book binding elements of the course particularly. And it was here that he met Alfreda, our mum.

They were married in March 1959, a small wedding with just close family. They started out married life in Northamptonshire but jobs moved them around the country. By the time Chris, their son arrived in 1963 they were living in Clacton on Sea and by the time Rosemary arrived (that’s me!)  in 1966 they were living in Wall Heath in the suburbs of Birmingham.

Mum and dad could not have children of their own so Chris and I were adopted. Sometimes this fact feels easy and sometimes more difficult, but dad never once made a distinction; we are his children he would say and nothing else was important.

1968 saw a move to Doncaster and dad became a district librarian with particular responsibilities for the mobile libraries.  I think this was a job he really enjoyed and would like to have stayed in but the local government reform of 1974 saw his job literally disappear as the West Ridings vanished!

The family moved first to the moors over the west side of Doncaster and then finally to Mirfield as dad got a senior job in Kirklees libraries, based in Huddersfield. He stayed there until he was made redundant in 1985.

During all these moves and changes, one constant for the family was the annual pilgrimage at half term down to Dorset to see family and friends. Dad’s dad had died suddenly in 1960 and I know this was a massive loss for him, his sister moved away to live in Switzerland and married over there so only his mum remained and she stayed in Corfe until she died in 1998.

Every year we would go and stay with Granny Goose, we all called her this as one legacy from the small holding days was she still kept geese in her back garden. Dad’s Uncle Emil and Auntie Joan lived at the seaside at Swanage so some days were spent down there as a family or on Studland beach nearby.

Dad didn’t have a great number of hobbies during his working life but he had inherited a stamp collection from his grandfather on his 21st birthday so this was where his love of classification and order would be exhibited. He was not a fastidious man in many ways (who can forget the cat haired trousers and the fights to get him to change out of them to go out for meals!?) but the stamp collection in big leather bound files with thick squared paper pages classified by country was pristine. Sunday afternoon he would spend sorting and sticking in collections that arrived, first day covers or single stamps he wanted.

His other great love was, as I have said, the furries that he chose to spend his life with. His beloved Susan, the spaniel he had as a young man, and then Furzy and Pearl, the dog and cat Chris and I knew first as children.  Then numerous cats and dogs, all special in their own way and all, of course, great providers of the pet hair we fought over!

Dad seemed to have a way of collecting waif and strays so the pets he had were always from shelters or ones that literally came in from the street.  In the later years he and I shared many calls over Tommy, the feral ginger tomcat he worked really hard to tame. Then there was Jack who was so timid he literally hid under cupboards. Dad got them to come to him and it was immensely pleasing for him to succeed at gaining their trust and love.

His special attention was also directed outside, where he always put food out for the birds and particularly at Great Hale he was delighted with “his” family of hedgehogs always fed in the shed.

After his working life was done, dad was heavily involved in voluntary work. He used to visit Kirkwood Hospice in Huddersfield and drive for visitors and patients there. Once he and mum moved to Lincolnshire to retire in 1991 he was involved in the hospice in Sleaford as well as the voluntary car service in Heckington, where they lived.

Dad was fond of secrets, so he was ideal for a secret society and he became a Freemason during his forties and remained so for many years, joining lodges in Yorkshire and his alumni, Greshams. I am not sure this was a popular move for everyone as mum was upset about the time it took up and Granny had religious reservations. Nevertheless, he persevered and rose through their ranks, changing the colour of his pinny (his word!) as he went!

The regalia were kept pristine, in sharp contrast to his other attire; I remember as a child we always had running conversations about where the yolk from his breakfast boiled egg might end up on his tie!

As part of the Arnold family heritage he became a liveryman of the Fishmongers’ Company, when he was 21, as his father and grandfather had before him. Fishmongers is one of the oldest livery guilds in the City of London and has close ties to his school, Gresham’s.

Invitations to black tie dinners in the Fishmongers’ Hall by Blackfriars, and to the oldest sculling race in the country, the Doggett’s Coat and Badge, along the Thames were exciting to attend and dad tried to rotate his invitations so everyone in the wider family had a trip down to London.

Dad was not always the easiest of people to be with or to know. As his family, we saw the stresses and strains of his life and the struggles he had at times, but I know he lived in Great Hale as he wished and was more content here.

He had his animals and he had his own particular habits. He loved to read thrillers and crime stories and he would always enjoy a good classic old film on the telly, as well as liking a variety of musical styles from baroque and early church music to jazz and swing, but he never modernised beyond about 1950 to be honest! This lot plus his voluntary work and such groups as Probus filled his time well.

He relished time travelling with cruising on the high seas being a great pleasure. Sometimes he and mum would go off but he also went round the Baltic and across to the Caribbean as a solo traveller.

He gave Chris and me a huge gift last year when he bought us, as a family, a 5-day cruise on the Saga Pearl. We mended bridges and cleared air that needed clearing, and he gifted us the opportunity to become a family again.  I will always be grateful to him for that, particularly as largesse was not his usual style!

He was very distressed when mum passed away in 2014 and although their marriage had its ups and downs they lived in a sort of symbiosis and it was a tough blow when she died so suddenly.

His own physical health was always a struggle and he succumbed to a heart attack only a year later, as well as beginning the tricky period where falling became a real issue. This led to an unfortunate stay in Boston Pilgrim in September last year, whereupon he was so ill it was deemed unsafe for him to return home to live alone.

This was when York House in Billinghay came into our lives. He went there last October and lived there until his death, being rude to staff and blustering at every opportunity! My brother and I both visited with our partners at various times over his stay and over his last week in particular. I can say we were all moved by the level of affection and care he garnered from the staff; for all his grumpy old man (his words, again) he had a blue eyed twinkle and a little wry smile that was hard to resist even when he was being outrageous!

As I have made phone calls and talked to people about him after his death they have said he was funny or he was clever or witty, and I have heard he was loved. Thank you to all those here, and elsewhere, that helped him when we, his family, could not.

His attitude to being over there (gesture to the coffin) can really be summed up in a comment from him. Chris, Jane, John and I sat in his room at York House the afternoon after he died doing some initial sorting out, we sat as a family and laughed and cried as you do at these times.

Dad’s love of order had been so systematic that he had planned for events that needed to be attended to after his death.  He had given to Chris some years ago a Life Book as a way to annotate the necessary actions for dealing with any illness, and to help us at this sad time. Dad only wanted it to be used after he died so a section about medication was completed in his spidery writing. It said “Not filled in because when this is read I will be dead” and dead was underlined twice.