A very strange and surreal week just ends. We were called by dad who asked us to come up to see mum. She had been in hospital for 2 weeks. Very odd to begin with as no one really knew what was wrong; after blood tests, scans and prods and pokes, still the medics seemed to be none the wiser. We were called, mum was asking for us, dad said, so we went. Then to our surprise, shock and sorrow she slipped down hill really very fast, and two days after we arrived she passed away. Her heart and lungs were tired and old, and did in the end fail, but actually, for a woman whose reproductive system was the bain of her life for 70 years, her death certificate proclaimed metastasised malignant ovarian cancer as the secondary cause of death. A diagnosis that was only made this last week, and the prognosis of “maybe a couple of months” I finally heard as she was dying. A rum affair indeed.

So, to a funeral. I have taken on quite a lot of the work in organising this, including working with the celebrant to tell her story in the tribute. To this end I wrote a meditation on mum, and I share it here, respectfully to honour her passing and recognise what an amazing lady she could be.

Mum was an arts person, not a scientist. After studying literature at Liverpool University her greatest love was reading, although in later years she seemed to have “far too many to mention” magazines to get through before she could start on the books – but it didn’t stop her buying books… and books and more books… so many that when we emptied boxes when she moved to her bungalow in Swineshead that they were two abreast on some shelves. We could now fill a library with her collection! 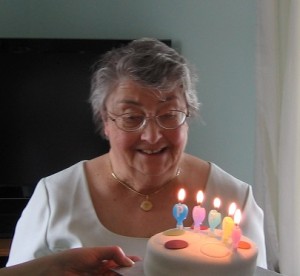 She didn’t just read but was a skilled writer too, her love of words shone through in her creative expression. She wrote creative non-fiction as well as some stories, but also poetry, like the one Harry read at the start of her funeral service. She was a stickler for grammar and punctuation – very old school – and I remember my school essays having her read pen corrections as she tried (mostly in vain) to help me with my English. This upset me a lot at the time, but I am envious of her very great knowledge of the mechanics of the English language. This skill was very useful when she was contributing and then editing the village magazines in Lincolnshire.

Talking of mechanics, this was one skill that was essential whenever she made her beloved train journeys. It was a standing joke in the family that every trip by train was fraught with delay, engine trouble or some other drama. She never failed to complete a journey, but she always alighted with a tale to tell.

Telling her tale was major inspiration in her abundant writings. Many did not make it to print but part of her collection were a set of fine stories she entitled “Pilgrimages” where she was in A&E or subsequently admitted to the Pilgrim Hospital in Boston and these appeared in the Heckington magazine. They still make me giggle, and on reading her collected works I see her humour and storytelling were a large part of who she was even if not everyone was privy to them.

When we went to see Julie, the florist for her funeral, she remarked that mum was a clever lady, and I think that is something people will remember about her. Also her dry wit – quite sharp at times – but always delivered with a straight face. She liked satire, and programmes such as “Have I Got News For You” were a staple in her TV schedule. Intelligent conversation as found on Radio 4 was another source of pleasure, and this station was a long standing accompaniment to her life. I remember as a child we started each day before school with the Today programme, Brian Hanrahan being a favourite. Later on when I would ring her there was often Radio 4 in the background – she liked to listen while she ironed. Women’s’ Hour, The News Quiz… these were all favourites.

Later in life she often resorted to Classic FM, especially at night when she wasn’t sleeping. Her love of music was also revealed in her piano playing, she tried very hard! During our childhood there was a time when Chris, mum and I were all taking piano lessons. (Mum and I were both jealous of Chris’ effortlessness with music, his ability to hear a tune and reproduce it with seeming ease!) She reports from this time the piano teacher saying “You have a good knowledge of the geography of the keyboard…. It is just a pity your map reading is a little off!”  (I found this quote amongst the vast quantity of dog-eared A4 jottings that are her writings) However she persevered and worked hard at difficult Beethoven pieces, the pages covered with many, many black notes… I loved hearing her play, and I now have the privilege of owning the piano we all played.

Singing was another great love; I remember her singing enthusiastically in church all my childhood, and after the move to Lincolnshire she joined Heckington church choir when she was only one of three at times. She also was vociferous when watching Songs of Praise, belting out the words which she always seemed to know from memory, even before the BBC helpfully started to put the lyrics up on the TV screen.

Although mum was much more of an indoor pursuits person it seems she did love to dig a vegetable patch – she found it therapeutic she said. I remember black and white photos of her at various homes in the past, sleeves rolled up, fork in hand, smiling. At Swineshead she still enjoyed her fruit and veg patch, always having copious fruits for jams and pickles – there are still jars and jars in her kitchen cupboards today!

She was very proud of her North-East heritage. Both parents hailed from the Durham area and both degree educated, not usual for mining families in those days – she came from a clever family indeed! Mum loved Durham and many pictures in her home were of this beautiful city and its magnificent cathedral; there is one arresting image I recall vividly of the church looming moodily over the river in a northern fog. Dad has said that the cousins should have these; I think that is a lovely idea.

Being an only child, her extended family; her grandparents and numerous uncles, aunts, cousins, were important to mum. She loved to visit the old places, and talked fondly of the annual trips “up north” with her parents when she was a child. When I went to Newcastle University I think she was doubly proud, and it gave her an excuse to visit once again.

Mum was not an easy person sometimes; she had had many difficulties and sadness in her life, which seemed to weigh heavy with her. When I could approach her in the creative places, (we shared writing and reading as great loves) I found a thoughtful and quick witted woman who would play with words to comic effect. The night we spent alone in the house together just when my parents were moving to Great Hale, and we read Mills and Boon to each other – all heaving bosoms and rasping breaths – we both laughed until we cried. Our shared writings and poems, our exchange of letters, our talking into the night or over long, long days (once for 12 hours straight)  about our shared history and thoughts on that. These were small and, sadly, not so frequent glimpses we each got into the others’ world… I will honour these times.