I am finally thinking I want to get back to the writing life, and this is a good place to come to do that. It has been a while since I stopped in and left some thoughts I know, but I have much to tell…

This year started well with a sense of promise and optimism. J  is due to retire in August, and the future began to open up before us like a budding rose. Then two things seemed to happen simultaneously; J asked me to become his wife, and we decided our most pressing priority is to set up home together.

Whereas the wonderful marriage proposal was well within the plans we had been formulating, the powerful desire to set up our home right now did come as a bit of a surprise. It was the antithesis of the choices we had been contemplating about this year where top of the list had been a plan to travel to the other side of the world and then spend 2015 living snail-like in a camper, exploring the Australian wilderness. Our change of heart to yearning after a fixed abode was flummoxing; we felt we had been set on the idea of our Gap Year, and we both mourned the loss a little.

These feelings were soon overwhelmed by the excitement of starting to plan our wedding. On Friday 3rd January J asked me to marry him. It was a joyous and unexpected evening of loveliness. His demeanour all day had betrayed his nervousness and although I could sense that, I could not make sense of why. He had been out to visit his father and had taken longer to get back home than I had anticipated; when he unexpectedly insisted that we go out for dinner (unusual for us as we don’t tend to go out on a weekend evening) I finally understood. I came downstairs after getting ready to go out only to find him standing in the lounge holding a large bouquet, and looking scared.  He had been to fetch the flowers impulsively after his visit to his dad; he decided to propose today! I had apparently given him some grief at Christmas about not asking me then… I really don’t remember; the sloe gin had overtaken me obviously, but he knew then that The Question would get a positive response!

So, I appeared in the lounge and he popped The Question.  We spent the next hour 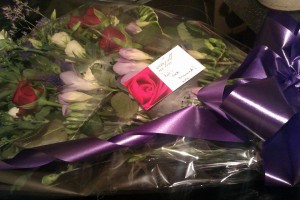 laughing, crying, and arranging the beautiful flowers in all the vases I could muster. As the evening progressed, it transpired that we both wanted to be married soon. I certainly hadn’t appreciated the chain of emotional events that would be set in motion by a proposal that I thought I was prepared for. It was a wonderful and happy period; we both felt it was right and were delighted by the effect it had on our relationship; a settling happened, like a bird onto her eggs, a peaceful and contented sense was with us.

Maybe because of this goodwill things happened quickly and easily. By the end of January we had the major pieces lined up; a venue; a photographer; a florist; a dress; a guest list; and, most importantly, a date, only 13 weeks away at the start of May. This was quite a lot to manage already, but I was relishing my role as the wedding planner.

And then we took a turn out to look at a few houses in South Shropshire, just to “see what it was like to look”. We had talked, sensibly, about waiting to see houses until after the wedding, but we are both impetuous sometimes and were drawn to the temptations of Rightmove. Unsurprisingly perhaps, given our desire to find a home for our new life, some houses talked to us. So, under the guise of “exploring Shropshire”, a place I am drawn to for no rational reason, we picked three that were well placed for a day trip of viewing.

We saw the Glass House last. It was magnificent on the brochure pictures, a splendid architecturally designed upside-down house with a striking full length conservatory and balcony. It had been my secret favourite all along and I hoped for something wonderful as after seeing the other two properties I was a bit disappointed; they had seemed much more bleak and dismal than I had wished for. It was a grim rainy day and by 2pm the sky was darkening. We arrived for our viewing and rushed to the front door, dripping because the heavens had just opened. Once inside we were struck by the warmth and the airiness of the living space and we loved the feel of the downstairs bedrooms, all facing out onto the conservatory. We saw potential loveliness in the gardens (hard to assess really at the start of February) and in the studio and garage/workshop started imagining all sorts of uses and hobbies and fun things we could do…

We left, we were smitten but both trying not to show it. Also we were weary; it was a long day with a drive and all the houses, so we retired to the hotel we had chosen. By the start of the next day after a lovely meal and a long talk followed by a long sleep we had decided we would take the bull by the horns and return to the Glass House to see it again. This morning was, by contrast, a super sunny one and as we sat having tea with the owners we knew we could live in this house and make it our home.

Time has rushed by since then; it is now only 6 weeks to the wedding, and potentially only one more after that until we sign for the house. The finer details of both events are still being sorted out, but it is a superb start to the year of dreams .